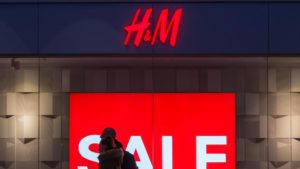 The Swedish fast-fashion chain H&M is to cut 1,500 jobs across its global operations as part of efforts to save 2bn Swedish Kroner (£158m) a year, amid slowing sales and rising costs for clothing retailers.

The group, which operates more than 4,600 stores in 70 countries with chains including Cos, Monki and Arket as well as its core brand, announced plans for the job cuts after profits fell 30% in the nine months to the end of August, partly resulting from the wind down of its operations in Russia in light of the war in Ukraine.

The company closed almost 200 outlets in the year to the end of August, mostly in Europe, as sales shifted online. It also said sales were weak in major markets over the summer while the cost of raw materials and freight rose.

H&M said the cuts would fall on head office operations around the world, including the UK, and would not affect store staff.

Explaining plans to make cost cuts at the time of its last financial report in September, Helena Helmersson, the chief executive of H&M, said the retailer had not been able to pass on the full impact of rising costs to shoppers. “In a situation of high inflation where household living costs are rising significantly, it is more important than ever to offer customers the best value for money,” she said.

In September, the company said sales in the early summer were weak in many of its major markets but later improved. The company is expected to reveal further tightening on sales and profits next month.

Fashion retailers anticipate a tough end to the year across Europe amid rising energy and food bills, which are diminishing households’ spare cash.

Overall spending on fashion was better than expected in the UK over the summer, as shoppers stocked up on holiday outfits and formal gear for a return to the office and for big events such as weddings after months of Covid restrictions.

However, spending on non-essentials is tightening through the autumn and winter now that energy bills have risen.

Clothing retailers are under particular pressure as unseasonably warm weather has hit sales of higher-priced coats, boots and knitwear, which provide a big chunk of annual profits. Retailers have also been forced to put up prices because of an increase in costs, further affecting volume of items shoppers are putting in their baskets.

The British fashion chain Joules called in administrators earlier this month putting 1,600 jobs and the future of the retailer’s 132 shops at risk after the online fast-fashion specialists Missguided and I Saw it First both went into administration over the summer before being bought out by Sports Direct owner Frasers Group. The cut-price chain Matalan also recently had to seek new funding.