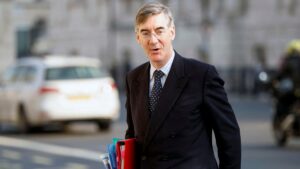 Facebook and Instagram have asked for government protection from Jacob Rees-Mogg’s bonfire of up to 4,000 EU laws on post-Brexit statute books.

In a letter to a parliamentary committee to be published on Friday, the parent group, Meta, asks that laws underpinning social media firms are either “explicitly maintained elsewhere” or “removed from the scope” of the retained EU law (revocation and reform) bill.

If they are not, groups like Facebook would be “less likely to operate in the UK”, wrote Richard Earley, the UK public policy manager at Meta.

The Labour MP Stella Creasy said the bill could force social media companies out of the UK by accident.

“Many of us want social media companies held to account for how their platforms are used. Closing them down by default is not the way to do that but Meta themselves say it’s possible because of the government’s REUL bill,” she tweeted.

Representatives of private and public interest groups were invited to contribute to a consultation on the bill earlier in November with criticism flooding in from organisations ranging from the Institute of Directors, trade unions including Unison, the TUC, and the Chartered Trading Standards Institute (CTSI), an organisation dedicated to consumer health and safety protections.

In a letter also published on Friday the CTSI calls on the government to delay the bill warning that there are 250 pieces of “vital legislation” covering food and product safety, animal health and welfare, fair trading, rogue and predatory trading, and legal metrology – the system for enforcing weights and measures so consumers get what they pay for.

The CTSI says a survey it conducted showed the public were most concerned that food standards would be affected by the bill.

It also found that tackling EU law was last on the list of priorities of voters who were more concerned with the cost of living and NHS. The controversial bill was the brainchild of the former business secretary Rees-Mogg.

The bill is at the committee stage in the Commons. It proposes to delete up to 4,000 laws covering everything from animal testing of cosmetics to holiday pay and passenger compensation rights, unless these are actively saved by a minister. It has been widely criticised as “reckless” and “anti-democratic” by legal experts because of the unprecedented powers it gives ministers.

The speed with which the government wants to push through the bill, tabled by Rees-Mogg in September, when he was business minister, has also been criticised.

Under a so-called sunset clause, all EU laws that are not amended or updated by 31 December 2023 will automatically be switched off.

This week the bill was described as “not fit for purpose” by the government’s independent assessor.

Earley wrote to the committee to draw its attention to a set of laws derived from the Electronic Commerce (EC Directive) Regulations 2002 that are at risk of being changed or deleted.

The laws contain provisions known as “intermediary liability” which protect social media companies from being liable for user conduct and content.

The inclusion of the e-commerce directive within the scope of the bill “will cause serious concerns”, Earley wrote.

If the protections for social media operations were not maintained the “ultimate effect”, he said, was that platforms and websites would be “less likely to want to operate in the UK and may pull back from making the UK a hub for innovative new products and services in the way the government envisages”.