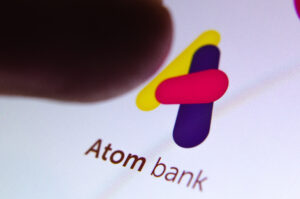 Atom Bank has pushed back its flotation by at least two years after tapping backers for another £30 million, giving it a post-deal valuation of £460 million.

The fast-growing, Durham-based online lender is now aiming for a “liquidity event” in 2024 or 2025, having previously pencilled in 2022 or 2023. A liquidity event could be an initial public offering on the stock market or a trade sale.

Mark Mullen, 54, its chief executive, said stock market conditions had soured. “I’m not hearing anyone in the market talk up the prospect of a listing next year,” he said, adding that there were now many more questions about the UK economic outlook after recent political upheaval.

Atom, one of the first digital-only challengers to win a banking licence, has been a poster child for the financial technology sector. Launched in 2016, it has 165,000 registered customers, £4.7 billion in deposits and a £2.9 billion loan book. It was a pioneer in new workplace practices, being one of the first significant employers to move its 470 employees to a four-day week with no loss of pay.

The capital-raising was at the same price per share as one in February 2022 that raised £75 million. Atom’s two biggest shareholders — BBVA, the Spanish banking group, and Toscafund, the private equity firm — each raised their stakes. Schroder UK Public Private Trust, the renamed vehicle of the collapsed Woodford empire, which owned 11 per cent, did not take part.

Mullen said Atom was in good shape, with only 0.1 per cent of its £1.9 billion domestic mortgage book in arrears. Just 11 corporate borrowers in the £1 billion loanbook were in arrears, he said.

Atom had been “trundling along at break-even level” for several quarters now, Mullen added. “We want to put a bit more growth into it.”